The American dream : stories from the heart of our nation / Dan Rather. 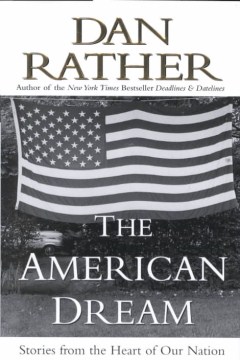 Fans of Rather's CBS Evening News will find the title of his latest volume familiar: for two years, CBS Evening News has frequently included feature reports called "The American Dream." Rather uses the same title for some of his CBS radio commentaries. The justification for shifting this multimedia reportage to print is the fact that both TV and radio "present the intractable problem of time." In this book, Rather can tell more stories of individual Americans and their dreams--only one of the subjects here has also been covered on TV--and can spend more time examining how their dreams "fit into the larger currents of the American Dream." Rather groups his material into chapters that focus on elements of our national aspirations: liberty, enterprise, pursuit of happiness, family, fame, education, innovation, and "giving back." The Americans that Rather describes are a diverse group but, he urges, their stories are an inspirational reminder of the power of the nation's fundamental ideas to motivate a wide range of people. ((Reviewed April 1, 2001)) Copyright 2001 Booklist Reviews

Prompted by the "American Dream" segments on the CBS Evening News, Rather recounts inspirational stories about people across America who are doing good. Copyright 2001 Cahners Business Information.

Only one of the people interviewed for this collection was also the subject of an "American Dream" segment on the CBS Evening News, but each of these stories could well be a TV docudrama: Teachers, writers, politicians, and others overcome mighty obstacles to attain a cherished dream, then turn around and use their wealth, position, or expertise to help others facing similar obstacles. The profiles would have seemed less formulaic if Rather had let the subjects tell their stories in their own words, in the style perfected by Studs Terkel. Instead, he offers a running commentary on these manifestations of the American dream, punctuated by occasional quotes. You can almost hear the stirring patriotic music behind some passages, while others evoke the image of Rather himself, seated at the anchor desk fishing for folksy analogies ("The media grapevine has grown as thick as kudzu"). Still, many readers will find these stories fascinating, and those who can never get enough chicken soup will also find them inspiring. Recommended for public libraries. Susan M. Colowick, North Olympic Lib. Syst., Port Angeles, WA Copyright 2001 Cahners Business Information.

"Where is the American Dream today?" asks celebrity broadcast journalist Rather in this spinoff from the popular CBS Evening News feature on this question that ran for more than a year. Interviewing people all over the country, he finds a resounding answer: the American Dream is everywhere. By turns inspiring and awesome, the stories of people achieving their dreams of family, education, service, financial success, happiness and even celebrity make a fine tour of the territory. Rather's everyday heroes and heroines overcome illiteracy and become cookbook writers; escape religious persecution to come to the United States; and overcome grinding poverty to become CEOs. Those who fear that a steady stream of such success stories may become saccharine fast will breathe easy once they see Rather shining the spotlight on people like Wayne Ward Ford, who rose from Washington, D.C., juvenile delinquent to Iowa state legislator and testifies, "I could read. I could lead... I could write proposals. Damn, I was scared of myself." Rather himself, by contrast, tends to drone a bit ("[Education] is rightly considered a foundation or point of embarkation for any dream"). Still, with a newscaster's keen eye for an arresting story and engaging characters, Rather brings a surprisingly fresh approach to an old question. (On-sale: May 8) Forecast: While Rather doesn't come close to matching the passion and emotion that Tom Brokaw brought to The Greatest Generation, Rather's popularity, the commercial success of his previous books and his reputation for journalistic integrity will no doubt propel him onto the bestseller lists, if only briefly. Copyright 2001 Cahners Business Information.