I thought my father was God and other true tales from NPR's National Story Project / edited and introduced by Paul Auster ; Nelly Reifler, assistant editor. 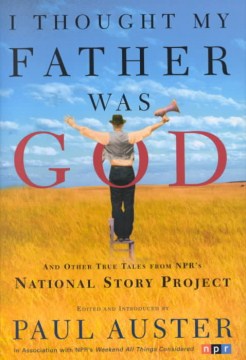 When novelist Auster was invited to become a regular contributor to National Public Radio, he hesitated because he didn't want to write "stories on command." "Why not solicit stories from listeners?" his wife, Siri Hustvedt, suggested. And so Auster asked for succinctly written true stories, and within a year, he received more than 4,000 submissions. He's read them all, some on the air, and selected 179 of the best and most representative to create a unique and unexpectedly affecting book. Here are clearly written and simply told stories "by people of all ages and from all walks of life" that Auster, his wonder and respect palpable, organized into 10 intriguing categories: animals, objects, families, slapstick, strangers, war, love, death, dreams, and meditations. These are stop-you-in-your-tracks stories about hair-raising coincidences, miracles, tragedies, redemption, and moments of pure hilarity. These impossible and indelible tales encompass reincarnated pets, lost and found items and loved ones, prophecies, and saved lives. There's something magical and electrifying about the realities these modest tales reveal, the hidden dimensions of human life, an amazing mosaic of mysterious occurrences and connections that are, apparently, as common as dust, as precious as love. ((Reviewed September 15, 2001)) Copyright 2001 Booklist Reviews

In 2001, when NPR asked Auster to become a regular storyteller on Weekend All Things Considered, he wasn't interested. Then his wife suggested that he ask people to send him their stories to read on the air, and a few months later the National Story Project with was born. From some 4000 stories, Auster has selected 179, grouping them in loose categories: animals, objects, families, slapstick, strangers, war, love, death, dreams, and meditations. All are short, all are true, and they can be sad, hilarious, or both at the same time. In the title piece, Robert Winnie's father tells someone to drop dead and he does! In another, a grandson who has made his grandmother furious hears his grandfather tell him, "You are my revenge." Others tell of impossible coincidences, difficult lives, and wonderful comebacks. As this collection ably proves, we all shape experience into stories, and Auster has done a storyteller's job himself of grouping the pieces effectively. Highly recommended for public libraries. [Previewed in Prepub Alert, LJ 5/1/01.] Mary Paumier Jones, Westminster P.L., Westminster, CO Copyright 2001 Cahners Business Information.

Finally, a bathroom book worthy of Pulitzer consideration: the one- to three-page stories gathered in this astonishing, addictive collection are absolute gems. In 1999, novelist Paul Auster (Timbuktu) and the hosts of National Public Radio's All Things Considered asked listeners to send in true stories to be read on-air as part of the National Story Project. Auster received more than 4,000 submissions; the 180 best are published here. The result is "an archive of facts, a museum of American reality." Auster is particularly interested in stories that "def[y] our expectations about the world, anecdotes that [reveal] the mysterious and unknowable forces at work in our lives." Accordingly, a vast number of the stories involve incredible, stranger-than-fiction coincidences: a pendant lost in the ocean off Atlantic City that's discovered 10 years later in a Lake Placid antique shop; the missing pieces of a china set handpainted by the author's grandmother that mysteriously surface at a flea market; a man who turns purple and dies just after being told to "drop dead." Others, while not as improbable, are no less powerful: an anecdote about a ruined birthday cake, for instance, leads one contributor to muse that fighting is "an intimate gesture reserved for the people close to you."; a small boy's realization that his mother has pawned her wedding ring so that she can buy him a school uniform serves as the knockout last line of one of the collection's quieter stories. (Sept.) Forecast: The renaissance in autobiographical writing, the accessibility of these captivating stories, and this title's appeal to all sorts of readers make this an ideal gift book. The push it will get from NPR should ensure robust sales. Copyright 2001 Cahners Business Information.

Listening is an act of love: a celebration of American life from the StoryCorps ProjectIsay, David

It's complicated: the American teenagerBowman, Robin

A hard rain: America in the 1960s, our decade of hope, possibility, and innocence lostGaillard, Frye, 1946-

One day: the extraordinary story of an ordinary 24 hours in AmericaWeingarten, Gene