Living in hope and history : notes from our century / Nadine Gordimer. 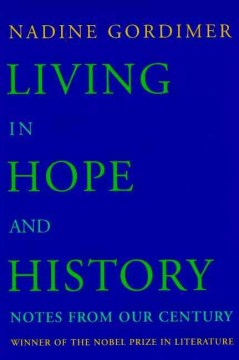 Gordimer is the first to admit that nothing she writes in her factual pieces is as "true" as her fiction. This collection of speeches, political essays, commentaries, and articles does not have the power and intimacy of the short stories and novels for which she was awarded the Nobel Prize in literature. Her voice here is often distant, dry, self-conscious. Yet, as in her other popular nonfiction collections, The Essential Gesture (1988) and Writing and Being (1995), she speaks with the authority of the insider, both participant and observer, bearing witness to what it has been like, as a white citizen and writer, to live in Johannesburg through the worst days of apartheid, then in the years of transition, and now in a time of hope and history. In the best pieces, the particulars are eloquent. "A Morning in the Library" (1975) describes the madness of apartheid censorship that banned works by just about every great writer, including Gordimer herself. "The First Time" (1994) tells what it was like to stand in long lines in her country's first democratic elections. Her focus is always on politics and literature: she is vehement that fiction cannot toe any line. ((Reviewed September 1, 1999)) Copyright 2000 Booklist Reviews

Awarded the Nobel Prize for Literature in 1991, Gordimer has been writing about her native South Africa for more than 50 years, and in this lively collection, she continues to tell the contemporary stories of people going about their own affairs within history's fall-out. The title story has fun with today's secrets: now things are in reverse, whites wanting to claim black. European immigrants can no longer grab what they want. Meanwhile, many local whites are leaving for Australia or Canada, where the Aborigines and the Red Indians had been effectively dealt with. And the identity clichés explaining where you are from to foreigners have changed: from Africa. South Africa. Mandela. Then there is the Holocaust survivor, an assimilated German Jewish grandma who witnessed the worst; she survives as a truly frivolous woman. Three great recently dead writers, Susan Sontag, Anthony Sampson, and Edward Said, enjoy a passionate argument in a New York Chinese restaurant. No slick irony, no heavy messages; as always, the mix of intimacy and politics stirs everything up. Copyright 2007 Booklist Reviews.

Gordimer on her very public role as both novelist and political observer. Copyright 1999 Cahners Business Information.

Nobel literature laureate Gordimer (The House Gun, etc.) has collected decades' worth of erudite essays and lectures about literature, culture, human rights and, of course, her work and home ground of South Africa. The first essay, a 1988 effort on fiction, morals and politics, lays out the distinction between political partisanship in her nonfiction and "the free transformation of reality" in what she refers to as her more "true" fiction. As essays, these writings shouldn't be expected to attain the nuance and depth of Gordimer's best fiction, but some of them are devastating, such as a 1966 piece on how South African black writers were being banned while whites were offered lectures called "Know the African." The more recent pieces deftly capture what she calls "the epic of our transformation": South Africa's first democratic election, she writes, "has the meaning of people coming into their own." Still, it troubles her that writers she admires Hungary's Joseph Roth, Milan Kundera, Czeslaw Milosz have rejected the leftist politics to which she remains committed. Unfortunately, this book lacks Gordimer's up-to-date reckoning with the fate of South Africa's Left, not to mention the more autobiographical reflections readers might desire. Still, this literary world citizen ranges widely (there are essays on Senghor, Grass and Mahfouz), musing thoughtfully about the sociocultural "givens" that a writer and reader must share. In her 1991 Nobel Prize lecture, Gordimer asserted that "the writer is of service to humankind only insofar as the writer uses the word even against his or her own loyalties." Though it is a tough credo to live up to, these essays are the work of a tough-minded, morally rigorous writer who has managed to do it. (Nov.) Copyright 1999 Cahners Business Information.